Aligning costs in Tanda with costs in your payroll system.

Written by Jye
Updated over a week ago

Configuring wage calculations in Tanda empowers your front-line staff with the ability to forecast labour costs while building schedules and report actual labour costs when approving timesheets. Ultimately, employee wages will be paid as per the configuration in your payroll system. However, it is important to align costs between Tanda and your payroll system so the whole team, from payroll to operations, have the same understanding and insight into wage costs.

When aligning or comparing cost in Tanda with Cost in payroll, check:

When exporting from Tanda into a payroll system, you are exporting hours or units to a pay category. If you notice gross wages are not matching between the two systems, the first variable to check is the hours/units in your payroll system versus what is in Tanda.

If the hours/units match between Tanda and your payroll system, the next variables to check are multipliers/rates. These include: 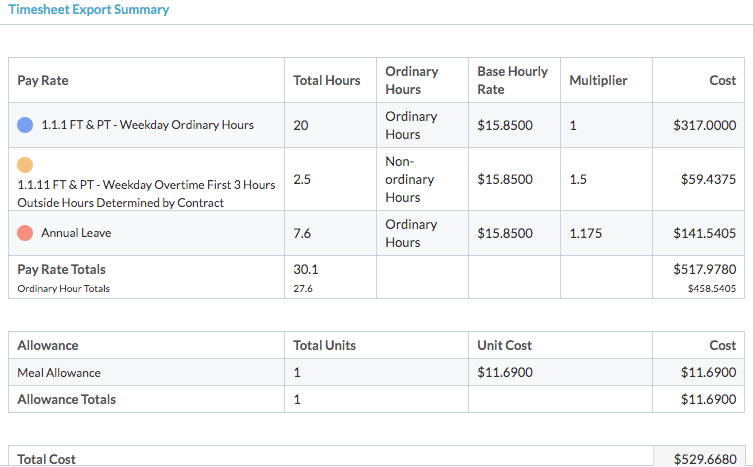 Why is there no cost showing for an employee?
Cost is calculated by hours x (base rate x hourly rate). If any of these variables are missing, then cost will not be able to be calculated. If you see no cost on a timesheet line, check the employee has a pay rate, a date of birth if rates are determined by age, hour entered on their timesheet, and rules configured with a rate or multiplier.

Why are figures in the Real Wage Cost report different from figures in payroll?

The Real wage Report is designed to get as close as possible to the real cost of your wages, including overheads such as leave accrued, pension contributions, and payroll tax. However, as some of these variables require information which sits outside of Tanda or is dependant on external variables, the on-costs calculations in Tanda should be used as a indicator of real wage costs, with payroll being the ultimate source of truth.

Did this answer your question?